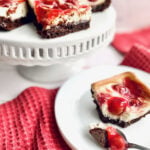 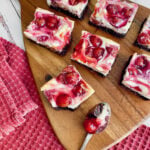 If you're a chocolate covered cherry lover, these Cherry Cheesecake Brownies will make your day! They start with a chocolate brownie crust, followed by creamy cheesecake swirled with cherry pie filling!

As far as I'm concerned, there's nothing more delicious than chocolate and cherries swirled together. This combination creates a decadent dessert, even though it's really easy to make!

Cheesecake bars also create a beautiful presentation when served on a wooden board or simple tray.

By using a tried and true brownie mix combined with cherry pie filling, you'll be whipping up these scrumptious cheesecake brownies in minutes. It's the perfect recipe to take to church potlucks, family gatherings and holiday parties!

If you love cheesecake desserts, you might also like Nutella Cheesecake Brownies and Baileys Streusel Cheesecake Cups!

3 - In a mixing bowl, beat cream cheese with a mixer until smooth. Add sugar, eggs and almond extract. Mix well and carefully spoon over brownie layer. Spread slowly until brownie is covered.

4 - Add spoonfuls of cherry pie filling on top of the cheesecake batter in rows. Swirl with a butter knife to make a design that you like.

5 - Be careful not to dip into the brownie layer. Only the first two layers of cheesecake and cherries should be swirled.

Note: When you take these brownies out of the oven, the middle will jiggle quite a bit. It sets after cooling. Leave it on the counter for 30 minutes, then transfer to the refrigerator for at least 2 hours before slicing into squares.

Can I use a brownie recipe instead of a mix?

Absolutely! If you have a favorite brownie recipe you love to make, feel free to substitute it instead of a boxed mix.

Is there a substitute for cherry pie filling?

You could try to make your own pie pilling with cherries, sugar and cornstarch. But, you would need to make sure it was thick enough to set after baking. Cherry pie filling works perfectly.

Should the brownie be gooey after baking?

Yes, the brownie will be soft and chewy once baked. It will not rise like it would if you were cooking it by itself. Make sure you store it in the refrigerator for at least 2 hours to ensure it's ready to slice into squares.

If you're lucky enough to have leftovers, be sure to wrap them tightly and store in the refrigerator for up to 5 days.

Cherry Cheesecake Bars can be frozen after baking for up to 3 months. Simply wrap them tightly and store in an airtight container. To serve, thaw in the refrigerator overnight or on a kitchen counter.

I've served these gourmet brownies at many holiday events like July 4th, Valentine's Day and Christmas. Their red and white hue makes them a versatile dessert for entertaining!

Try these other recipes at your next event... 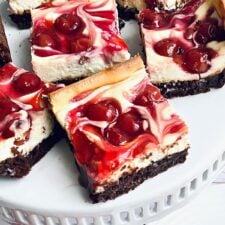