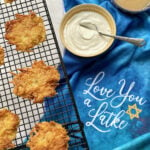 What are Traditional Potato Latkes?

Traditional Potato Latkes are made from starchy potatoes grated by hand and mixed with matzo meal, egg, onion, kosher salt and pepper. The cooking method involves dropping them into hot oil and frying in a cast iron skillet until golden brown and crispy.

When following Jewish tradition, you'll want to serve latkes with sour cream or homemade applesauce during Hanukkah and Passover. Be sure to make latkes with matzo meal (ad) during Passover since it's important to use unleavened bread.

Latkes also make the perfect breakfast entree or holiday appetizer for any type of party!

What's the Difference Between Latkes and Potato Cakes?

While classic latkes are made from shredded russets, southern potato cakes are molded into thick patties using leftover mashed potatoes.

Southern cakes fry better if you form them into thick rounds, but latkes are thin, delicate and crispy. Although completely different, both fry nicely in a cast iron skillet and are equally delicious.

Looking for the best potato latke recipe? Use traditional and simple ingredients!

How to Make Potato Latkes

1 - Peel potatoes and place them in a large bowl of cold water. Add ice for best results.

2 - Using a the large holes of a box grater, grate potatoes and onion into a bowl of ice water to prevent them from discoloring.

3 - Place grated onion and potatoes in a cheesecloth or thin kitchen towel over a bowl.

4 - Wrap the mixture in a dish towel or cheese cloth and squeeze out all of the excess water.

5 - Drain excess liquid out of the bowl except the white potato starch. Leave it in the bottom of the bowl to help bind the cakes together.

6 - Add grated potatoes, onions, kosher salt, pepper and matzo meal to the potato starch in the bowl. Mix together with a beaten egg to create a better texture.

7 - The mixture should be thick enough to form a tablespoon of the batter.

8 - Drop spoonfuls of the potato mixture into a frying pan filled with an inch of oil on medium heat in a single layer. Fry for 3 to 5 minutes on one side until edges start to brown.

9 - Flip cakes over with a slotted spoon or spatula and fry on the other side for 3 to 5 minutes until golden brown.

10 - Transfer crispy latkes to a wire rack with paper towels under it. Sprinkle with kosher salt. Serve hot off the rack with sour cream and applesauce.

Why are latkes eaten during Hanukkah?

During Hanukkah, frying food in oil symbolizes the miracle that happened when only a small amount of oil was left for the holy light to burn in the Temple, but it miraculously burned for eight days. This is how the Festival of Lights began.

What is matzo meal?

Matzo meal is unleavened bread that has been ground into fine crumbs that resemble cornmeal. It's unleavened because it's made without yeast or any type of raising agent. Matzo meal is used as a binder to help food retain its shape, or to coat food for frying or baking. Since it's made from wheat, using matzo meal does not make your latkes gluten-free or keto friendly. You would have to leave it out completely if you're following a special diet.

What's the difference between latkes and hash browns?

Hash browns are shredded potatoes fried in a skillet. Latkes are grated, then drained and mixed with matzo meal, egg, onion and seasonings. They're two completely different food items. It's not recommended to use frozen hash browns to make latkes because the potatoes need to be grated to bind together.

How do you keep latkes crispy?

When you make true latkes, it's best to drain them on a cooling rack instead of paper towels. Using paper towels can cause fried food to be soggy and keep it from crisping. The best way to keep latkes crispy is to place them on a rack over a sheet pan and keep warm in an oven until ready to serve.

Although I'm not Jewish, I love learning about different types of foods and traditions. I admit that it took several tries before I got the hang of latke making. It takes a little practice to get it right, but it's totally worth the effort.

Since I'm a beginner, I did my research. I learned that every family has a different way of making the best latkes. Some are completely flat and crunchy, while others are thick and chewy. Most recipes are passed down through Jewish families by a great grandmother or other family member.

One thing is for certain...if you want to make an authentic latke, you need to grate the potatoes by hand. If you do this, you'll have potato starch left in your bowl which is a good thing.

Hand-grated latkes will get rave reviews from family and friends! Your traditional potato pancakes will turn out with a crispy crust and a tender center which is one of the favorite ways to serve this excellent recipe.

If you're looking for more delicious potato recipes, try these favorites... 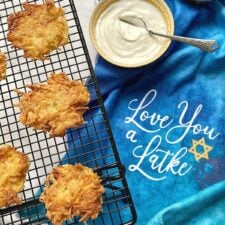