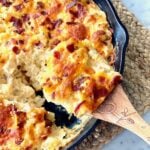 Loaded Hash Brown Casserole tastes just like a loaded baked potato! This easy recipe is packed with cheesy, bacon-filled flavor that's perfect as a side or brunch entree.

What's Special About This Dish?

If you're looking for the best dish to take to a potluck dinner, look no further than Loaded Hash Brown Casserole. Once your family and friends taste this recipe, you'll be asked to make it time and time again.

The holidays are the perfect time to prepare this baked hash brown recipe. Everyone loves to wake up on Christmas morning to this delicious dish! Since it can be made ahead and baked in a cast iron skillet (ad), clean up is a breeze.

This cast iron hash brown casserole tastes just like a loaded baked potato and goes with all types of main dishes like Grilled Pork Tenderloin, Dutch Oven Chicken, or Crunchy Parmesan Chicken. But, my favorite way to serve it is with fresh fruit on weekend mornings as a brunch entree.

To make this dish vegetarian, substitute tomatoes or tofu for bacon.

How to Make Hash Brown Casserole

The easiest way to make this baked casserole is by using a 12" cast iron skillet. (ad) That way, everything can be made in the same pan. But, it's also fine to use a large 13 x 9 inch casserole dish or your favorite pottery.

Start by cooking 8 pieces of bacon in a cast iron skillet (ad) until crispy. Allow the bacon to drain on paper towels, then crumble into small pieces. After draining the grease from the skillet, add cream of chicken soup, sour cream, cheddar cheese, diced onion, and a dash of garlic salt and pepper.

Add a family-sized bag of southern style diced hash brown potatoes and half of the crumbled bacon. (Southern style hash browns are in small cubes instead of shredded.)

Stir well. Top casserole with cheddar cheese and crumbled bacon, then bake at 350 degrees for 1 hour until golden brown.

Any recipe with potatoes, cheese, bacon and sour cream just screams comfort food. While this casserole is baking, your family will have a hard time not flocking to the kitchen to see what's cooking!

You might have made this type of casserole before, but by increasing the amount of sour cream and adding bacon, I promise you'll experience it in a whole new way. It's a great recipe for any occasion.

Do you have to thaw hash browns?

If you want to ensure that the hash browns are cooked throughout, thawing them overnight in the refrigerator is a good plan. However, I've made this dish numerous times without thawing the potatoes and never had any issues.

What's the difference between shredded and diced hash browns?

The shredded type of hash browns resemble shredded cheese, while the diced type look like little cubes. Either kind will work in this recipe, but the diced version is heartier.

Does this recipe taste like Cracker Barrel hash browns?

Yes, it actually tastes better than the Cracker Barrel hash brown casserole because it uses diced potatoes instead of shredded. This gives you more potato flavor in each bite! Plus, there's bacon on top, so the flavor is hard to beat.

This is a great recipe to freeze and use at a later date. It can be stored in the freezer in individual servings, or in an aluminum pan or airtight container for up to 6 months. 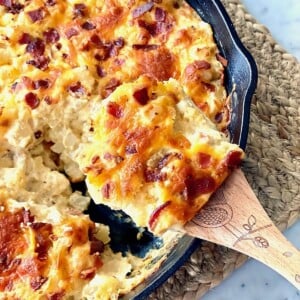