Why This Recipe is Special

Potato salad is a personal thing. Everybody has a recipe for it, and hardly anyone will vary from their version.

But, if you're feeling adventurous, give Red Skin Potato Salad a chance. It's one of those comfort foods that will sneak up and surprise ya. Most people who try it say it's the best potato salad they've ever had!

I used to put potatoes in the refrigerator to cool off before mixing them into a salad. But, I started noticing the chunks of potatoes had a strange texture and were so large it was hard to eat them.

After a lot of trial and error, I realized I was making potato salad completely wrong. The secret is to mix everything together while the potatoes are still hot. Wow, what a discovery! The texture is better and the flavor is noticeably bolder.

My next revelation came when I stopped peeling every single potato before boiling it. By leaving the skins on, it cuts the prep time in half and gives the salad an extra element of crunch.

Speaking of that, I think a really good potato salad is best when it has a BUNCH of crunch! In my version, I use two types of onions, celery, dill pickle relish, and sweet bread & butter pickles. Lots of veggies packs some awesome flavor and balances out the creaminess.

If you love cold salads, try these other related recipes...

Folks just love my Red Skin Potato Salad.  Many say it's the best potato salad they've ever had!

The secret to making potato salad is to mix it while the potatoes are hot.  It mashes to the perfect consistency and retains its bold flavor.

Potato salad is usually best when made a day ahead and refrigerated over night.

Check out my best dishes each week on Meal Plan Monday and The Weekend Potluck.

I'm here to help you create easy recipes that add a touch of 'sass' to every meal!

Get new recipes in your inbox once a week! 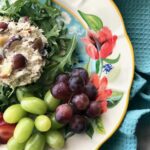