Cherry Crumble is a cherry lover's dream! It's filled with tart, sour cherries...then covered with a buttery, crisp topping. You'll flip over this easy dessert that's made without oats or nuts.

Of all the desserts I've made this year, Cherry Crumble is my favorite. There's nothing like the tartness of dark cherries surrounded by a topping that's crumbly, but not too doughy.

Some people might call this a cobbler, or maybe even a crisp. But, to me it's a crumble because the crust is so incredible you can hardly contain yourself! There are no oats or nuts in this recipe, just in case you have a family like mine who doesn't like them. But, you can definitely add extras if you wish!

Cherry Crumble is freeform and rustic, which means it won't look perfect no matter how hard you try. That's another reason I love it so much. It's not like the cobblers you make with a cake mix. The topping is thicker and crispier, which tastes more like a pie crust without doing all of the work.

It's also one of the easiest desserts to throw together in a jiffy, which comes in handy when you're craving something sweet like I am right now!

What Type of Cherries Should I Use?

For this recipe, I used Dark Morello Cherries that are pitted and stored in sweet syrup. This product, or a similar version, can be found at Aldi or in most grocery stores in the jarred fruit section. The 24 ounce jar makes the perfect amount of cherry crumble for 8 people.

If you can't find tart cherries, you could always use canned cherry pie filling, but the cherries won't have the same tart flavor. Oregon Cherries (ad) will work, but be sure to add sugar to the filling and use two (14 ounce) cans.

Can I Use Fresh or Frozen Cherries?

If you have an abundance of cherry trees in your yard, or find dark cherries on sale, by all means use fresh cherries if you like. Of course, you'll have to adjust the recipe if you make substitutions.

You can definitely use tart frozen cherries if you thaw them out first, then add ½ cup sugar, water and cornstarch to the filling.

How to Make The Cherry Filling

The cherry juice does all of the hard work for you, so the only ingredients to add are cinnamon, cornstarch and vanilla. Simply pour the cherries with juice in a saucepan over medium heat.

Mix a slurry of cornstarch and water together, then add to cherries and juice in the pan. Stir well, then add cinnamon and vanilla. Cook for about 5 minutes to thicken, then remove from heat and pour into a 9 inch pie plate.

How to Make The Crumble Topping

The crumble topping is so buttery and sweet, you'll almost forget there are cherries underneath!

Start by mixing flour, granulated sugar, baking powder, cornstarch and salt in a large bowl. Cut cold butter into cubes and work it into the dry mixture with your hands, or use a mixer or food processor. Keep mixing until the dough is coarse and crumbly.

To make Cherry Crumble, sprinkle the topping over the cherries and bake at 350 degrees for 45 minutes until the crust is golden brown and cherries are bubbling!

How Do I Store Leftovers?

If you're lucky enough to have any leftovers, Cherry Crumble can be stored in an airtight container in the refrigerator for up to 5 days.

When reheating, make sure to do so in the oven so the crumbly topping will be crispy. I've also used my toaster oven to heat up this dessert and it works really well. You might have to broil the topping for a few minutes to crisp it up.

Cherry Crumble is the type of dessert you eat straight from the oven with a big scoop (or two) of vanilla ice cream. I like to sprinkle extra cinnamon on top and use a giant spoon so I can dig in like a boss!

If you love fruity desserts, you're in luck! Try these recipes for a real treat...

Cherry Crumble is a cherry lover's dream! It's filled with tart, sour cherries...then covered with a buttery, crisp topping.

Store leftovers in an airtight container in refrigerator for up to 5 days. Place Cherry Crumble in the oven to reheat and broil topping for a few minutes to crisp it up.

If using another type of cherries without syrup, you'll need to make a syrup with 1 cup of water and ½ cup of sugar to add to the filling. Mix in cornstarch as directed, and add cinnamon and vanilla.

It's not necessary to add extra sugar to the filling if using the original recipe since the syrup (or juice) contains sugar.

Sharing is Caring! Please leave a REVIEW, PIN and SHARE my recipes with friends! 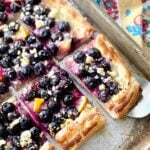 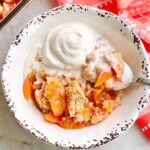 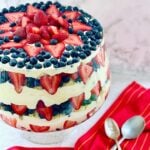 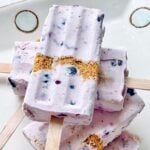 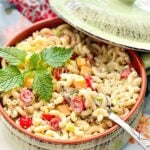 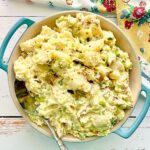 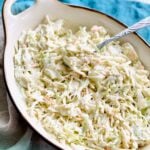