Triple Berry Crostata is a blend of three delicious berries with blueberry jam in buttery pie crust. It's the easiest and most scrumptious dessert you'll ever make!

What is a Crostata?

A crostata is the Italian version of a baked pie which is usually in a free form shape. Crostatas are open in the middle, and folded around the edges in a rustic fashion. They're easier to make than most pies because they're very forgiving.

You could put anything inside a pie crust and it would be amazing, but this combo of blueberries, raspberries and blackberries is simply divine.

Triple Berry Crostata is not too sweet, and has just the right amount of tartness. It's possibly the easiest dessert you'll ever make, and comes together pretty fast too.

If you don't have three different kinds of berries, you could just use one and double the amount. But, I love the flavor burst that explodes when three berries are blended together.

Start With The Crust

I could make this complicated, or I could make it really simple. I'm kinda leaning towards the simple plan 'cause I'm wanting to eat this RIGHT NOW.

Making a homemade crostata crust is really simple and the results are truly amazing.

Just mix flour, sugar and salt together in a food processor or blender and add cold butter with a little ice water.

Make a nice mound of dough and refrigerate it for 10 minutes. Then roll it out into a thin crust that will fit in a cast iron skillet (ad).

For the filling, let's use something that will hold all of this fruit together...like blueberry jam. You might think it would be too sweet for this mixed berry crostata, but it compliments the tartness of the berries perfectly.

Add a little cornstarch, three different kinds of berries, and you're ready to roll!

The fun part starts when you crimp the edges of the crust and roll it inward, leaving a large area open in the middle.

I can just see my spoon dipping into this crostata as soon as it comes out of the oven! Bake it at 450 degrees for 30 minutes, or until crust is golden brown and berries are bubbly.

The best way to serve a mixed berry crostata is straight from the skillet. Don't forget to add a big scoop of vanilla ice cream just before serving.

If your friends are lucky enough to taste this dish, they'll be begging you to make it for every occasion.

Love desserts with berries? It's your lucky day! 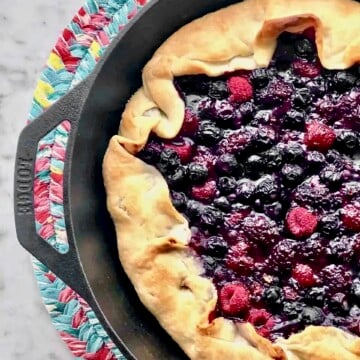