Why This Soup is Special

Momma taught me how to make classic Dutch Oven Potato Soup when I was just knee-high to a grasshopper (as we say down south). It was her go-to recipe when someone got sick or needed a little pick-me-up.

You can make this creamy soup in a crock pot or instant pot, but I love making it in a dutch oven like Momma used to do. It's one of our family's favorite soups because it's an easy recipe with simple ingredients.

Get out your cast iron dutch oven (ad) because most of the fixing, cooking and cleaning happens in one pot. It's comfort food at its best!

The chunky potatoes cook in about 30 minutes, and the rest of the prep is easy. Pop some Southern Cornbread in the oven and you'll have dinner on the table as quick as a snap!

Simple ingredients make the best recipes. There's nothing complicated about this potato soup, which makes it the perfect recipe for beginners. See recipe card for quantities.

1 - In a large dutch oven, saute’ garlic, onion and celery with butter until soft. Add chicken or vegetable broth and bring to a boil.

3 - Check frequently during cooking. Add water if needed to cover potatoes. Turn off heat when they're soft and add 1 cup of milk. Stir and set aside.

4 - In a separate saucepan, make a roux by adding melted butter and flour. Stir over medium heat for 1 minute, then add the other cup of milk. Whisk until smooth.

5 - Slowly add shredded sharp cheddar cheese, stirring constantly. Mix in half and half and stir well. Pour cheese sauce into pot and stir until creamy. Add salt and pepper to taste if desired.

You'll love making this hearty soup on a cold winter day, or anytime in between. To make it a loaded potato soup recipe, simply add your favorite toppings after ladling it into bowls...

If you make this delicious soup for your family they'll be begging for more. If you make it for friends, they'll bug you for weeks to give them the recipe!

What potatoes are best to use in this recipe?

Using red potatoes work best because the peelings are soft and don't have to be peeled before cooking. You can also use russet potatoes or Yukon gold. However, if the skins are thick, you'll need to peel them first.

Can potato soup be frozen?

Yes, it can, but the cream and cheese don't thaw well. If you don't mind a change in consistency, freeze it after it has cooled for up to 3 months in an air tight container.

How do I cook potato soup in a crock pot?

To make this recipe in a crock pot, add all of the ingredients to a slow cooker except those required for the cheese sauce. Set it on a low setting for 8 hours. Mash potatoes with a potato masher or immersion blender and stir. Make cheese sauce in a saucepan as directed and pour it into the crockpot. Stir well and ladle into bowls.

Loaded potato soup is so popular, it's served at most chain restaurants like Panera, Chili's, Outback and Cracker Barrel. However, it's just one of many dutch oven recipes on Quiche My Grits!

Whether you make these delicious recipes in a dutch oven or crock pot, they're perfect for soup season! 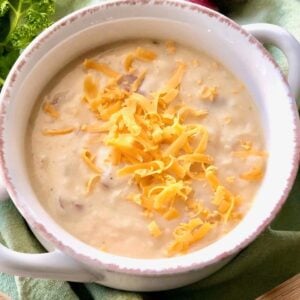