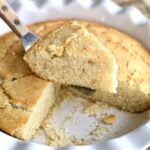 Southern Cornbread is easy to whip up and a favorite of every southerner I know. There are many different recipes out there, but this one is tried and true. It’s also fast as lightning!

Why You’ll Love This Recipe

This recipe works when you want cornbread on the table in a jiffy, or you’re craving good old cornbread and milk. Yes, that’s a thing in these parts, and trust me…it’s mighty good!

If you’re looking for a jazzed up version of cornbread, you could try my Cheesy Skillet Cornbread. Folks like it an awful lot!

I’m a firm believer in the easy breezy, lemon squeezy philosophy. That’s why I always use White Lily self-rising cornmeal (ad) whenever I get a chance.

If you don’t have self-rising cornmeal in your neck of the woods, try using another recipe containing cornmeal and flour such as Dixie Cornbread from Christy Jordan at Southern Plate. It’s delish!

You’ll also need to choose if you want yellow or white cornmeal mix. My advice is to try both and see what you think. (Hey, more cornbread is never a bad thing!) I tend to go with white cornmeal mix because it’s lighter, but many folks enjoy the yellow corn flavor.

Quantities are listed in the recipe card at the end of this post.

This recipe is made for a small skillet or 9 inch pie plate. Double the recipe if you’re using a large 12″ cast iron skillet (ad).

Add a 1/2 stick of butter in a pie plate or small cast iron skillet (ad). Place in a hot 425 degree oven for 3 minutes to melt butter and preheat the pan.

In the meantime, add self rising cornmeal, buttermilk, egg, and additional melted butter to a large bowl. Mix well and pour into preheated pie plate or skillet.

Pop it into a 425 degree oven and bake for 25 to 30 minutes until golden brown. The melted butter in the skillet with create the best crust you’ve ever tasted.

Nothing could be finer than a piping hot slice of southern cornbread slathered in melted butter. Except…maybe a giant Cat Head Biscuit. In my humble opinion, it’s a tie between the two. 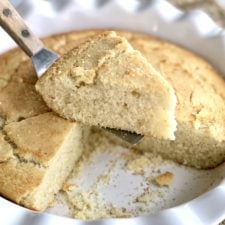