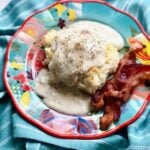 Herbed Bacon Gravy is as good as it gets. Slather it on buttermilk biscuits, and you've got the best biscuits and gravy you've ever tasted!

Where Did Biscuits and Gravy Originate?

Biscuits and Gravy may have appeared in the south sometime after the Revolutionary War according to Aaron Hutcherson for The Washington Post. However, many believe biscuits and gravy were born out of necessity in southern Appalachia in the 1800's.

That's where my family originated, which explains why biscuits and gravy were always a staple on Granny Mac's table. They're hearty, yet inexpensive, which made them a popular choice to feed large families.

Are There Different Types of Gravy?

There are as many types gravy out there as you can imagine. Some folks even make chocolate gravy, which is an entirely different conversation.

Where I live, there's a breakfast restaurant named Biscuit Head that's totally devoted to Cat Head Biscuits. They also offer a large array of gravy choices. This place is so popular, you rarely see it without a line curved around the building.

The most widely known southern gravy is made with ground sausage. You may have heard of sawmill or white gravy, which is believed to have gotten its name near the lumber yards in Appalachia. Since there were lots of hungry sawmill workers at that time, biscuits and gravy filled them up and gave them energy to do hard labor.

There's redeye ham gravy, tomato gravy, and sour cream gravy. But, we like to eat bacon for breakfast around these parts, so I make my gravy with drippings from bacon fat.

In my opinion, if you're gonna eat Cat Head Biscuits, ya gotta top 'em with Herbed Bacon Gravy! It's fun to create, but some people have a hard time making it without lumps. The secret is in the heat.

How to Make Herbed Bacon Gravy

1 - Start out by frying several strips of bacon in a cast iron skillet (ad).

2 - After removing the bacon, turn the heat down and add all purpose flour to the grease. Whisk it well until the flour is absorbed completely. This is an important step that avoids lumpy gravy.

3 - It's time to turn up the heat! Add milk to flour in increments and stir like crazy while the heat rises. Once everything is incorporated, turn down the heat again and add cream. Stir until smooth.

4 - Add more milk if gravy gets too thick. Continue to cook if gravy is too thin.

How Do I Fix Lumpy Gravy?

Believe me, I've made some lumpy gravy in my life. But, no worries! Here's how to fix lumps in gravy if they happen.

You'll need a colander, a spoon and a bowl. Place the colander over the bowl and pour the gravy into it. Using the spoon, stir until only the smooth gravy passes through the colander and leaves the lumps behind. Now, throw away those lumps, and your gravy is ready to serve!

At this point, you're ready to make the gravy your own. I like to add salt, lots of pepper, garlic powder and herbs to my gravy. Sometimes I use fresh herbs, and other times, I add whatever I have in my spice cabinet.

Dried oregano is one of my favorites, but I have tried everything from rosemary to thyme. You can season it with only salt and pepper, or go hog wild and create your own special gravy with fresh or dried herbs.

Pile a big scoop of herbed gravy on a southern biscuit and all your cares will fade away. But, they're not just for breakfast. Southerners have also been known to eat biscuits and gravy for dinner. Just sayin'.

Brunch is a big deal in the south. Try these recipes if you want to serve an authentic southern brunch any time of the day. 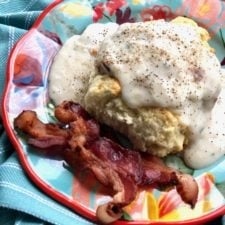