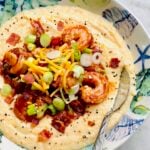 Southern Shrimp and Grits is a classic dish featuring cheesy shrimp drizzled with BBQ sauce and topped with bacon! The smoky flavor creates the best shrimp and grits recipe you've ever tasted!

Why You'll Love This Dish

How This Recipe Stands Out

The addition of barbecue sauce makes this recipe stand out and get noticed. It's the perfect comfort food...with a whole lot of sass!

Most folks top their grits with pan gravy or a type of creole sauce, but this recipe ramps up the southern flavor by adding barbecue sauce and bacon to the mix. It's a close match to the first shrimp and grits recipe we ever tasted.

You'll love the crunchy topping of bacon and green onions ladled over creamy grits filled with smoked gouda cheese. It's southern food that's quick and easy from start to finish!

Where Did Shrimp and Grits Come From?

Shrimp and Grits was originally created in Africa and migrated to southern plantations along with many favorite southern-style recipes.

The first time my hubby and I tasted classic shrimp and grits was on vacation in Charleston, South Carolina. At the time, we had no idea this low country city was where this dish became popular. Since then, we've come a long way in our appreciation of Charleston's incredible food scene.

We fell in love with the taste of creamy, smoked gouda grits so much that I came home and immediately tried to recreate the recipe. The savory, garlicky shrimp coated in barbecue sauce and topped with crispy bacon helped seal the deal!

Over the years, this iconic southern dish has moved its way down to New Orleans, Louisiana, which introduced different spices like creole sauce and cajun seasoning.

What Type of Shrimp Is Best?

Fresh shrimp is preferred, but unless you live on the coast, you may not have access to a fish market. It's perfectly acceptable to use frozen shrimp, but make sure they are wild caught and completely thawed beforehand.

As far as size is concerned, I like to use jumbo shrimp which are 21 to 25 count, but extra large shrimp ranging from 26 to 30 count works equally as well.

Just remember plump shrimp can shrink in size considerably after cooking. If using frozen, choose shrimp that are peeled and deveined, or plan to handle this task beforehand.

The Best Grits to Use

Stone-ground grits made from hulled white corn are the grits usually recommended in this dish. They're coarse in texture, and rich in corn flavor, making them the perfect choice for this cheesy grits recipe.

I like my grits smoother, so I use yellow grits made from yellow ground corn. White corn grits are also smooth and delicious.

You'll get different opinions from most chefs about the type of grits to use, but one thing's for sure...instant grits or quick grits are not recommended. They don't have the correct consistency to compliment the ingredients in this recipe.

Quantities are listed in the recipe card.

How to Make BBQ Shrimp and Grits

Bring water or chicken stock to a boil in a large saucepan. Add grits and garlic salt. Stir and reduce heat to low.

Cover and simmer grits about 20 to 30 minutes until done. Whisk frequently while cooking to reduce lumps and avoid sticking. When thick and creamy, take grits off of heat.

Cook bacon pieces in skillet over medium heat until crispy. Transfer to a paper towels to drain. Remove bacon fat from skillet, reserving 2 tablespoons for shrimp.

Peel and devein shrimp if needed and add to a cast iron skillet (ad). Saute' until pink on both sides over medium heat (about 2 minutes).

Mix in minced garlic and BBQ sauce. Stir a couple of times until shrimp is coated, then turn off heat.

Ladle grits into serving bowls, then use a slotted spoon to place shrimp mixture onto grits. Top shrimp with crumbled bacon and green onions to garnish.

What to Serve With Shrimp and Grits

Southern Shrimp and Grits is a great brunch entree served with a side of fruit, blueberry muffins or buttermilk drop biscuits.

Many folks in the southern region like to eat Shrimp and Grits for lunch or dinner alongside a southern veggie like collard greens or brussels sprouts.

Other sides that go great with shrimp and grits are Rainbow Salad and Strawberry Pecan Salad.

I don't recommend serving leftover shrimp and grits because the shrimp doesn't taste the same after being reheated. It can become rubbery and nobody likes that! It's also not a good dish to freeze for the same reason.

What is the secret to good grits?

The secret to making good grits is to cook them low and slow. Stir grits while adding salted water, and stir frequently while they're cooking to avoid lumps. The longer they cook, the better they taste, especially if using the stone ground type.

Are grits better cooked with milk or water?

If cooking grits alone, it's best to cook them with milk. They will be creamier and the flavor will be noticeably different. In this recipe, since we're adding a great deal of cheese, we cook them with water first and add cheese and cream at the end.

Creamy cheese grits with smoky shrimp and chopped bacon is southern comfort food at its best. When you add barbecue sauce, it takes regular grits to a whole new dimension! Try these other barbecue recipes the next time you're in the mood for some sassy southern cuisine... 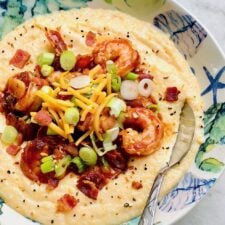