What Is a Dump Cake?

A dump cake is usually made with pie filling, cake mix, and butter. Those are the main ingredients, but there are many variations.

You basically dump the ingredients into a 9 x 13 inch dish and pop them in the oven. An easy and delicious apple nut cake comes out in 45 minutes!

The fun thing about a dump cake is it's hard to mess up. But, the best part is how amazing it tastes.

This apple cinnamon dump cake is moist, packed with chunky fruit, and layered with a crunchy topping. Apple Walnut Cake is especially good when topped with homemade cinnamon whipped cream!

What's the Difference Between a Dump Cake and a Poke Cake?

Dump cakes literally involve dumping all of the ingredients into a pan or skillet before baking, while poke cakes require that you use a fork to poke holes in the cake after baking.

You only need 5 ingredients for this recipe. Chances are, you already have these ingredients in your fridge and pantry, which makes it so easy!

Quantities are listed in the recipe card.

Empty two cans of fried apples or apple pie filling into a 9 x 13 inch oven-safe dish. Sprinkle apples with cinnamon and 1 cup of the walnuts.

Top with remaining walnuts. Swirl cake with a knife.

Bake at 350 degrees for 45 minutes until golden brown. What could be easier than that?

If you want to get creative with this recipe, or try another combination, here are a few ideas to get you started...

How to Make Cinnamon Whipped Cream

To make Cinnamon Whipped Cream, pour a carton of heavy whipped cream into a mixing bowl. Beat with a mixer on high speed until stiff peaks form.

Fold in powdered sugar, vanilla, and a dash of ground cinnamon. Stir and serve on top of Apple Walnut Dump Cake while still warm. See quantities in the recipe card below.

If you like this recipe, you'll love my other desserts... 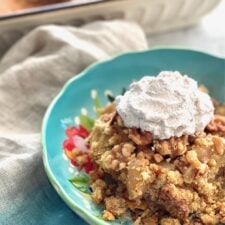 This recipe doubles the walnuts that most dump cakes require. If preferred, you can use only 1 cup on top, but the more the better! Store leftover cake and whipped cream in the refrigerator for up to 3 days.