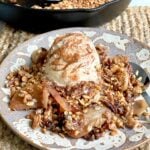 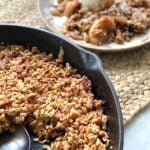 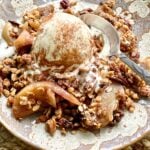 Fried Apple Crisp is made with tart apples, yummy granola, pecans, brown sugar and cinnamon. This dish will make your house smell like an apple orchard on an autumn day, and warm you up from the inside out!

What's Special About This Recipe?

I have a confession to make. When I set out to create Fried Apple Crisp, I thought of ways I could avoid dragging out my apple-peeler-corer-slicer. (ad) I don't like to peel things...especially potatoes, carrots, or apples. So, let's get straight to the fun part and leave the peeling for another day!

How, you ask? By frying those apples with their skins on!

I gotta admit...this batch of Fried Apple Crisp was the best I've ever tasted. It was even better than what you might expect. Frying the apples in my cast iron skillet (ad), then finishing them off in the oven, was a crazy good idea.

Did I mention the topping? Yummy granola, pecans, brown sugar and cinnamon (mixed with butter) is a match made in heaven. It caused the house to smell like an apple orchard for hours! In fact, as I write this, I'm still smelling wafts of cinnamon-spice flying through the air.

How to Make Fried Apples

Start by slicing the apples, and be sure to leave their skins on. Honey Crisp apples are perfect for this dish because they're tart and have a soft skin after cooking.

Add apples to a cast iron skillet, (ad) then sprinkle with cinnamon, and stir. Add pats of butter, vanilla, and brown sugar.

Begin the frying process over medium heat, and watch these babies turn into dessert!

How to Make Granola Topping

After the apples are tender (about 15 minutes), it's time to make the topping. Granola is the perfect choice because it has everything you need in one bag.

I used a granola that didn't have much sugar added, but if you use one that has a lot of sugar in it, you may want to omit the brown sugar in the topping.

Simply add your favorite granola to a separate bowl, pour in chopped pecans, then add a little flour and brown sugar. With your hands, mix in softened butter until mixture is crumbly.

By now, the apples will need a little more moisture, so add a cup of water and stir well. It's time to add the crumbly topping, so go for it! Cover the entire skillet with that crumbly goodness and bake in a 350 degree oven for 15 minutes.

You're gonna love how amazing Fried Apple Crisp turns out! 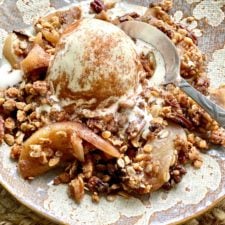