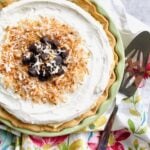 Chocolate Coconut Cream Pie starts with chocolate ganache on top of a flaky crust. It’s layered with a creamy filling and toasted coconut, then garnished with homemade whipped cream to make the best coconut cream pie you’ve ever tasted!

Why You’ll Love This Recipe

There are pies, and then there’s Chocolate Coconut Cream Pie. It’s in a world all by itself because it’s that good.

If you’re a coconut lover like me, this pie will be your new go-to dessert for every occasion. The black bottom chocolate ganache is a tasty surprise.

Several things stand out in this recipe, but the number one ingredient is toasted coconut.

There’s just something about toasting the coconut that brings out all the flavor. When you add it to homemade whipped cream, and line the bottom of the crust with chocolate ganache, you’ve got a winning recipe!

To begin, place the thawed crust in a 9 inch pie plate, and crimp the edges all the way around. Prick several holes in the bottom of the crust, then bake at 450 degrees for 10 minutes. Use pie weights (ad) if desired to keep the crust from sliding down the edges. Allow pie to cool while making the chocolate layer.

Chop the chocolate into small pieces. Add heavy cream, then microwave in 30 second intervals until melted. Stir frequently until mixed well, then spread on top of baked pie crust.

To make the creamy filling, add milk to a large bowl. Sprinkle in pudding mix, and whisk until set.

Pour the rest of the heavy cream into a mixing bowl. With a mixer, beat until stiff peaks form. Add confectioner’s sugar (ad) and stir a few times. Fold half of the whipped cream into the pudding and stir until creamy. Reserve the other half for topping.

Toasted coconut couldn’t be easier to make, but you have to watch it to make sure it doesn’t burn. Spread it onto a half sheet pan and place in a 300 degree oven for 5 minutes, stirring frequently during cooking.

Watch it closely and take out of the oven once it turns golden brown. Add 1 1/2 cups toasted coconut to the filling and stir well. Reserve the remaining coconut for the topping.

The final step is to spread the remaining whipped cream on top of the filling and sprinkle it with toasted coconut. I also added a few chocolate baking chips, but you can skip this step if desired.

I highly recommend that you use the homemade whipped cream if possible. It’s creamier and has no artificial ingredients, which makes a big difference in the taste.

Isn’t it gorgeous? I mean, it took every bit of will power I had not to dive into this pie and eat a big slice before I took these pics! It’s decadent, smooth, and incredibly YUM!

Feel free to make substitutions in this recipe, but it’s amazing exactly the way it’s written.

If you want to save even more time, you could leave the coconut plain and not toast it in the oven. But, the flavor wouldn’t be as intense, and you wouldn’t have a pretty garnish.

You could also used frozen whipped topping instead of making homemade whipped cream, but the difference is noticeable.

If you like, you could use coconut instant pudding instead of vanilla. Adding a little coconut extract to the filling is also a nice touch if you have any in your spice cabinet.

If pie is your thing, I’ve got you covered! 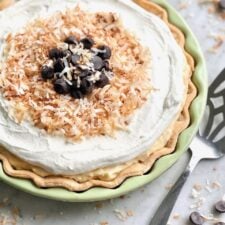 Refrigerate pie for at least 2 hours before serving for best results.