Nothing tastes like Grandma's cooking as much as this Southern Corn Pudding Recipe. It’s an old fashioned dish that features fresh corn, heavy cream, butter and eggs.

There are no artificial ingredients, and nothing comes from a can, so the flavor is incredible!

What Is Corn Pudding?

Authentic Southern Corn Pudding is a classic recipe made with fresh ingredients resembling a custard. It’s sweet, creamy and rich, which makes it the best side dish you’ll ever taste!

If you’re from the south, you might have tried several recipes named corn pudding. There’s one style made with Jiffy cornbread mix that includes sour cream, and a corn casserole made with stuffing mix.

Most southerners love skillet creamed corn, which is also a traditional favorite.

While these recipes are terrific, there’s only one that can truly be called classic corn pudding. It comes straight from grandma's house to your table.

Traditional puddings are made with fresh corn and minimal ingredients. There’s no cornmeal, canned corn, or stuffing involved. This vintage recipe is totally gluten-free!

Southern Corn Pudding only requires a few simple ingredients you may already have in your kitchen. Quantities are listed in the recipe card.

Those are the only ingredients you need to be in comfort food heaven in just 30 minutes!

How to Make Corn Pudding

You’ll need four ears of fresh corn that has been shucked and washed. Cut it off the cob with a sharp knife into a large mixing bowl.

Be careful not to cut all the way into the cob, and to start at the top and work your way down.

Chop up a small onion and put it in a skillet with the corn and butter over medium heat. Sauté for a few minutes until onion is tender, then add sugar and mix until melted.

Pour heavy cream into the skillet, followed by cornstarch mixed with a little water. Stir until thickened over low heat. Add a dash of garlic salt, pepper and parsley.

Take skillet off of heat. Beat eggs in a separate bowl, then fold into the corn. Mix well, then pour contents of skillet into a 6 x 9 or 8 x 8 inch casserole dish.

Bake at 350 degrees for 30 minutes until corn custard is set and golden brown.

Can I substitute canned corn for fresh?

This southern corn pudding recipe is based on using fresh corn on the cob, but if it’s not in season, you can definitely use two cans of whole kernel corn in its place. Make sure you drain the cans before use.

What's the difference between corn pudding and a casserole?

Corn pudding is made with eggs and cream, which creates a soufflé when baked. Casseroles contain heartier ingredients like cornmeal, stuffing or bread crumbs. This pudding recipe is gluten free, but casseroles are not.

Can corn pudding be frozen?

You can freeze the egg mixture, but it may curdle when reheated due to the heavy cream content. I recommend eating leftovers within a few days instead.

Can this recipe be made ahead?

Yes, you can make it up to 2 days in advance and keep in an airtight container in the refrigerator until time to bake.

This Southern Corn Pudding recipe is often served during Easter or Thanksgiving dinner with glazed ham or turkey. It also tastes great with cornbread biscuit dressing and pineapple cheese casserole.

At our house, you can find this classic southern side dish at all of our family gatherings. We serve it at holiday dinners, but also with barbecue ribs and pulled pork!

It’s a very versatile side dish that everyone goes crazy over!

Some folks like a sweet corn pudding, while others like it savory. If you want to switch up your holiday meals, try adding green chiles or green onions to the pudding for an entirely different taste.

You can also add cheddar cheese and use whole milk instead of cream if desired. No matter how you make it, this homemade corn pudding is an easy recipe that will be a great side dish on your holiday table.

If you're looking for other side dishes to serve alongside this recipe, give these a whirl! They're make a great combination for holiday dinners when served together. 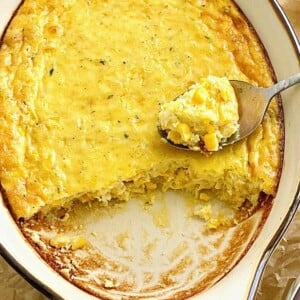